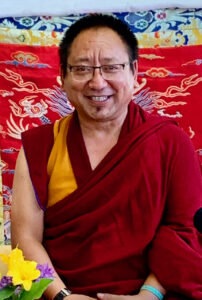 Khenpo Konchok Molam arrived at White Lotus Buddhist Center at the Sangha’s invitation in January 2017. He began a challenging job of teaching to Westerners, learning English and adapting to new food and the wild ways of a lay Western sangha! Since then, many within the sangha have grown fond of Khenpo and our respect for his skillfulness in relating to people, as well his immense knowledge of Buddha Dharma makes us very grateful for his presence.

Venerable Khenpo Konchok Molam was born to a nomad family in the Nakchu region of central Tibet in 1973. He eventually made his way across the Himalayas and entered the Drikung Kagyu Institute in Dehradun, India, at the age of 13, becoming a monk. There, he trained in the basic sacred knowledge of Buddhism for six years and then took the vows of a fully ordained monk, or Gelong vows, from HH the Drikung Kyabgon Chetsang.

Khenpo was then accepted to Kagyu College, where the chosen monks continue their study of the higher philosophical texts of Buddhism. He completed the rigorous nine-year curriculum, gaining confidence in the view through study and debate. Upon “graduation” in 2006 he was awarded the Acharya certificate and began teaching at Kagyu College. He continued to attend various seminars on Tibetan Grammar and Buddhist philosophy at Sera College, Dharamsala. He also composed Tibetan books on Buddhist philosophy at Kagyu College especially for the younger monks.

In 2009 he was awarded the title of Khenpo and began visiting dharma centers in Singapore, Malaysia, Taiwan and Germany to share his immense Dharma knowledge.  Khenpo also served as the Drikung Kagyu’s representative to the Tibetan government’s Department of Religion, attending meetings in Dharamsala, India, with HH the 14th Dalai Lama and representatives from the other lineages.

Khenpo is a master of Tibetan grammar and is still called upon to edit publications and texts for the Drikung Institute.

Thorough and serious in his teaching, Khenpo Molam is fun and light-hearted in his relationship with the sangha, a precious treasure for our center!